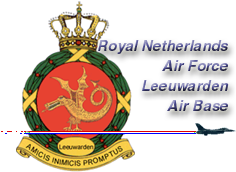 Leeuwarden Air Base is situated north-west of the City of Leeuwarden (Frisian: Ljouwert), capital of the province of Friesland. It is the only air force base in the northern part of The Netherlands. The air base is home of two F-16 squadrons: 322 Squadron and 323 Squadron, both operating the Lockheed Martin F-16AM/BM Fighting Falcon. It is also the home of 303 Search And Rescue Squadron, operating the Agusta Bell AB412SP helicopter.

The air base crest consists of a gold colored flying dragon on a red background.

[Photo ©1995 S.T. Planken]
Leeuwarden city in the south as viewed from the north-west of the air base. In the center you can discern the tower.

As one of the Main Operating Bases of the Royal Netherlands Air Force, Leeuwarden Air Base is part of NATO's Joint Command Centre (JCCENT), one of three Joint Sub-Regional Commands of Allied Forces Northern Europe (AFNORTH). It is one of two Regional Headquarters of Allied Command Europe (ACE), headed by the Supreme Allied Commander Europe (SACEUR).

The swing role concept has been proven during actions in former Yugoslavia, where Dutch F-16s routinely flew missions with NATO's Rapid Reaction Force, carrying a mix of air-to-air and air-to-ground weapons in operations known as Swing Combat Air Patrol.

Aircraft of Leeuwarden Air Base also offer a contribution to the Peace Time Quick Reaction Alert Force in The Netherlands, as do the other Main Operating Bases of the Air Force in turn. The QRA task is performed round the clock with both aircraft and pilots plus maintenance personnel in the highest state of alert, so that in case of an emergency scramble the assigned aircraft can be airborne within a few minutes.

Leeuwarden Air Base was originally built in 1936 as a civil airfield (first spade by minister M. Slingenberg), mostly at the initiative of NV tot Exploitatie van het Luchtvaartterrein Leeuwarden (corporation for the exploitation of the airfield Leeuwarden). The airfield was put into use on June 24, 1938 but it was not much frequented since the airfield was mainly used by aircraft of KLM Royal Dutch Airlines making intermediate landings on their flights between Schiphol (Amsterdam) and Eelde (Groningen). Aircraft took off and landed using a plain grass strip in front of a wooden station building. That building, nowadays designated C-10, is still in use as the Tradition Chamber of Leeuwarden Air Base.

On Thursday May 10, 1940, The Netherlands was invaded by Germany. After the capitulation of The Netherlands, Leeuwarden airfield was taken over by the German Luftwaffe. The Germans extended the original area of 800 by 800 meters and constructed paved runways. Salient detail is that the Luftwaffe used debris from the curious 1940 bombardment of Rotterdam, which destroyed the heart of this city. Construction activities were placed under supervision of the Organisation Todt.

The Luftwaffe operated various day and night fighters (amongst which the Messerschmidt 109 and 110) as well as bombers (in 1941 and 1942) which were mainly used to attack targets in the United Kingdom. As a result, the British Royal Air Force attacked Leeuwarden airfield several times.

In the night of September 16th-17th, 1944 Leeuwarden airfield was attacked by 48 Lancaster bombers, dropping a total of 214.3 tons of bombs. This can be considered the end of the operational Luftwaffe base.

Nevertheless, there are still numerous buildings at the base today that originate from the war.

Before the liberation of The Netherlands on April 13-14 1945, the runways and hangars were largely destroyed by the Germans. This and the damage caused by the allied attacks had caused severe damage to the airfield and the polder drainage (the airfield has been built 1.5 m (3.3 ft) below Normaal Amsterdams Peil or Ordnance Datum).

The Dutch construction company Heidemij started with the re-establishment of the runways and buildings. In 1946, KLM started their charter flights between Amsterdam - Leeuwarden - Groningen with de Havilland, Domini and — later on — Dakota aircraft. This was rather profitable since transportation by road and rail was not always possible because of damaged railways and a lack of vehicles. This continued until September 1, 1949, though the need for air transport was ever increasing.

In 1949 the Royal Netherlands Air Force took over the air field — albeit unofficially at first. Since then the airfield was referred to as Leeuwarden Air Base.

In the early stage of NATO, various NATO air forces used the air base intensively during the many exercises. In fact, at one point Leeuwarden Air Base was the most frequented air base in Western Europe.

Leeuwarden was the first RNLAF base to operate jet fighters: In 1948 the first Gloster Meteor arrived for 323 Squadron. At that time, three squadrons were assigned to Leeuwarden and in 1950 a fourth squadron was added. The Gloster Meteor was in use here until 1956, when it was replaced by the Hawker Hunter (nowadays a Hawker Hunter has been put on display near the main entrance).

During the Hawker Hunter era, Leeuwarden became more important in air defense, which caused lots of foreign aircraft to visit the air base.

On June 30, 1977 the Search And Rescue flight was transferred from Soesterberg Air Base to Leeuwarden Air Base. This unit operates the Agusta-Bell AB412SP, which replaced the Alouette III in 1994.

The first Royal Netherlands Air Force F-16, a B model with tail number J-259 as shown on the photograph, was in service until 1999. Leeuwarden was the first base to switch to this type and was the first base to operate the F-16 after its Mid-Life Update program, an extensive modernization program which makes it possible to fly well into the 2000s with this type.